Hey y’all! Now that my novel THE ADEPT is complete and in the hands of my trusted beta readers, and I have to constantly remind myself NOT to edit while its out, I’m finally working on a new project.

Basically this idea came to me fully-formed during a dream (after binge watching Marvel’s Jessica Jones, go figure!) about a pair of siblings who find out they have super powers. Its morphed into something a little more complicated than that, but I think its going to be so much fun.

I touched on the idea a little in my last post, but I wanted to use this as an opportunity to showcase the way I plan my novels! The Adept’s planning was a little different, so I’m going to show what I do here for what I’m calling POSTHUMAN. I’ll include pictures where I can and talk about what kinds of research/prompts/etc I’ve done for it.

I’m using a traditional notebook to plan this project, using Susan Dennard’s For Writers—which has all sorts of excellent advice, I must say!

So far I’ve brainstormed a little in the notebook, but most of my ideas are still in my head. I’m trying to write them down as I generate them, either in the notebook or in Scrivener. In the notebook I have the following sections: characters (primary and secondary), scene ideas, super power ideas, setting, and planning. I also have those sections in Scrivener, as you can see below. 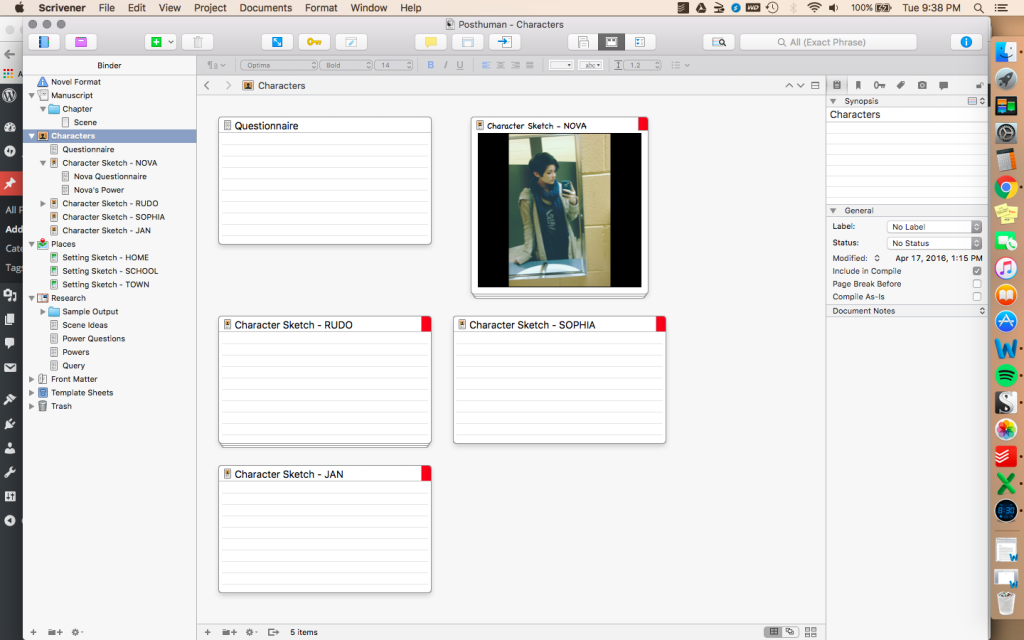 Here is a screenshot of my Scrivener binder for POSTHUMAN. This section is for the characters themselves. So far I have the main family—the Vanhooks—which consists of the parents and kids. I do have more characters in my notebook, like Nova and Rudo’s best friends, but I haven’t transcribed them into Scrivener just yet.

Tonight I’ve been researching super powers and their limitations. This research has given me lots of ideas for other super teens in this world and even perhaps a villain, too. 😉 I’ll let you know how that goes! 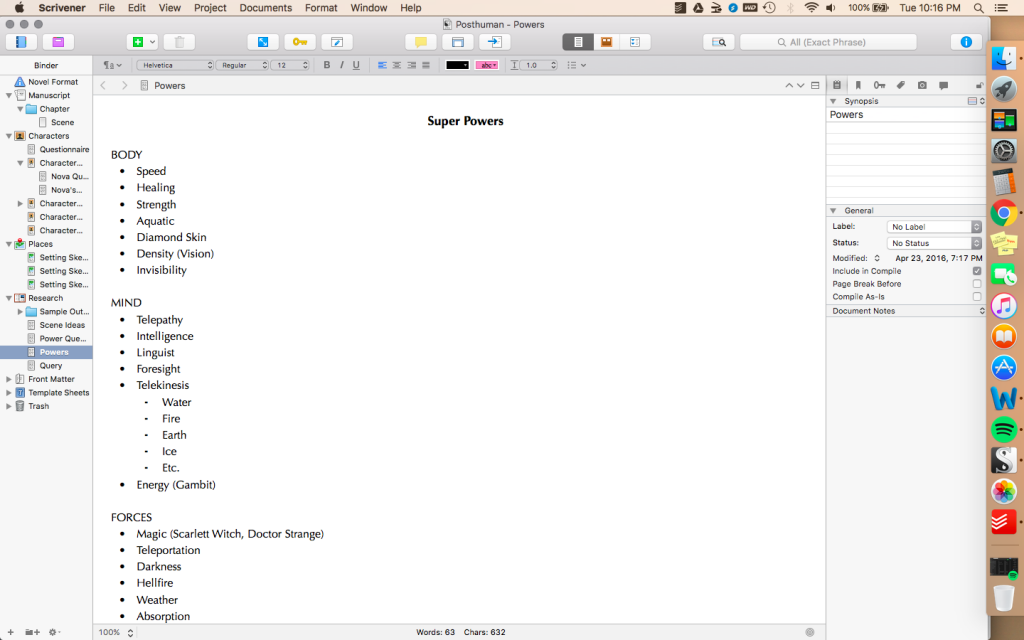 I even started drafting a (terrible) query for this project. Really that’s there to help me brainstorm ideas for the story and the tone I want to write in. So far, I’m in love with Nova’s voice; snarky teenager who suddenly finds herself in the middle of events she can’t control. I’m looking forward to writing this more each day, but I want to have the bones down before I delve into the world.

Next week I’ll go over how I create the plot of the story. I’m by no means an expert, and this story is likely to change a few times before I’m done, but I’ll go over the beginning stages and would welcome feedback on the story and my process.

If you have any questions or comments, please leave them below! I’ll happily include them in my next post.